Written by Johann Kirsten and Wandile Sihlobo[i], first published in The Conversation

South Africa’s land reform policy remains highly contested. But, in our view, a number of persistent myths about farmland statistics and the structure of commercial agriculture skew debates. This makes it difficult to reach some common understanding about the realities of land and agriculture in the country.

In 1994 when South Africa became a democracy, white farmers owned 77.580 million hectares of farmland out of the total surface area of 122 million hectares. The new government set a target of redistributing 30% of this within five years. This target date has been moved several times and is now 2030.

According to popular belief between 8% and 10% has been redistributed so far. But as we show below this is incorrect as it omits a number of key statistics.

Only 17%-20% of the 77,58 million ha is suitable for field crop, irrigation and horticultural production. More than 55% of farmland is only ideal for extensive grazing (land that is poor and dry but animals can roam widely, the Karoo being an example), and another 20% for intensive pastures and animal production (land, the KwaZulu-Natal Midlands being an example, that receives good rains and has good pastures for grazing).

This shows that the potential of farmland being used to create full-time sustainable livelihoods is limited. This suggests that a careful and measured approach needs to be adopted in redistribution efforts.

These realities are the basis for our arguments against five standard myths about agriculture and land in South Africa. That’s not to say that there isn’t a great deal still to be done. But failure to recognise the gains that have been achieved means that policies can’t be developed based on what’s been achieved so far.

The number of 40,122 commercial farmers is widely quoted as the total number of farmers earning a commercial income from farming. The number comes from the 2017 census of commercial agriculture.

But the number is flawed.

Firstly, the census only considers farmers who are registered for VAT (for which the threshold is a turnover of R1 million a year (about US$59 000 today).

It’s difficult to estimate the “race” of commercial farmers. But, using different data sources including the 2011 population census, the 2017 agricultural census and the 2016 community survey we estimated that most commercial farm enterprises are black-owned. And that only 18% of these households are white.

Fact: white commercial farmers (around 44,000 farming units) own 61 million ha – 78% of the farmland that comes with private title deeds or 50% of all land in South Africa.

This myth results from a misinterpretation of the concept of “commercial” and “scale”.

Commercial agricultural production indicates production beyond subsistence needs, with some (or a major share) of the total production sold to the market. This usually also involves the purchase of production inputs such as seeds and fertiliser.

But commercial production happens at various levels or “scales of production”.

The scale of farming is not determined by land size. Instead, it refers to the gross farm income (or turnover) of the farming enterprise.

Land size is not a good indication of the scale of the farming operation. For example, a small irrigation farm of 10 ha can deliver millions in turnover while a 10,000 ha extensive grazing farm is unlikely to exceed R1 million in turnover per annum.

If we unpack the census of commercial agriculture, commercial farming in South Africa consists largely of small-scale family-based operations. Almost 90% of all VAT-registered commercial farming businesses can be classified as micro – or small-scale enterprises (turnover below R13.5 million). While this is true, it’s also a fact that there are just over 2,600 large farms with a turnover on average above R22.5 million per annum. These farms are responsible for 67% of all farm income and employ more than half the agricultural labour force.

If we take into account the farms that are not registered for VAT it is evident that 98% of all farming operations in South Africa are small-scale operations.

But, a mistaken leap is made to say that all white commercial farmers are “large-scale” operations, and all black farmers are “small-scale”. In the process, most writers on South African agriculture confuse the “scale of the operation” with the “race” of the operator.

Fact: most white commercial farmers in South Africa are small-scale and family-based operations. Only a small minority (2 600) are large-scale operations. Most of these are owned by white farmers.

Myth 3: Commercial farmers are hoarding land and not selling any farms

It is often argued that white commercial farmers are holding on to their land and not offering it for sale to potential buyers.

Deeds office records provide insights into the activity in the farmland market. Between 2013 and 2021, the annual number of farm transactions recorded varied between 2,000 and 4,000. In 2021 2,585 farms were sold and registered to new owners. Most (58%) of these were farms smaller than 300 hectares.

Between 2003 and August 2022, the state acquired 2.8 million ha which brings the total area of farmland acquired by the state since 1994 to 3,12 million ha (or 4% of freehold farmland). This suggests that the state is also active in the market.

Fact: The farmland market is active with around 2% of total farmland with private title deeds traded annually.

Myth 4: All black farmers with private title deeds acquired their land through the land reform programme

Deeds records show that since 1994 black South Africans have privately acquired a total of 1.78 million ha of farmland through normal self-financed market transactions.

Over the same period, the government redistribution programme has assisted beneficiaries to acquire a total of 7.2 million ha of farmland. Thus, for every four hectares transferred by the State to black South Africans, private transactions contributed another one hectare to the process.

Fact: Black farmers have acquired almost 2 million ha of farmland (2,3% of total freehold farmland) on their own without any assistance from the state-sponsored land redistribution programme.

Myth 5: South Africa has only redistributed 8% of farmland to black people

The debate on the expropriation of land is largely driven by the myth that white farmers are hoarding land and are inflating prices, and therefore, it is impossible to remove the racially skewed land ownership patterns in South Africa.

These arguments typically ignore the statistics on the land market and the fact that black South Africans have been acquiring farmland on their own. These arguments also conveniently ignore other factors, such as bureaucratic inefficiencies, patronage and corruption – that have slowed down land reform.

In addition, the incorrect presentation of the progress of the land reform process is also maliciously used to inflate the argument for expropriation. If South Africans are true to themselves and correctly report the statistics, then they will be much closer to the 30% target. We estimate, using various official datasets, that up to August 2022, the land statistics were as follows: 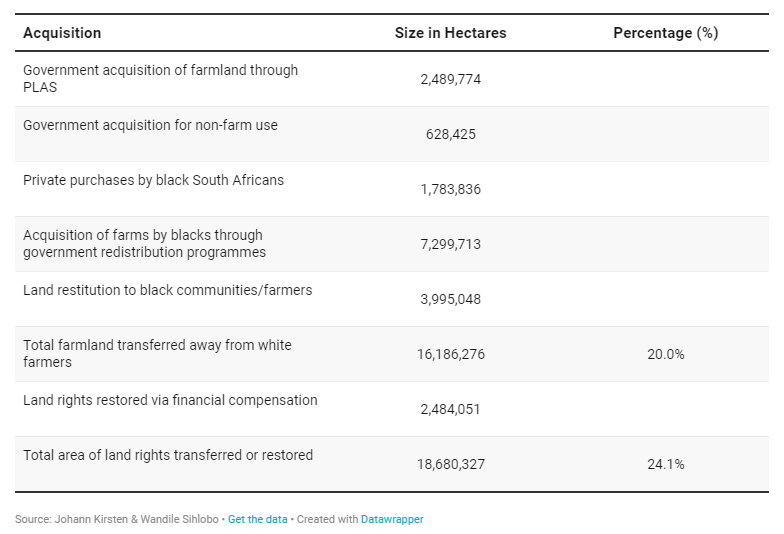 Based on these numbers extracted from official sources it is evident that South Africa has made much more progress than what is been punted around. It is, therefore, disingenuous of analysts and commentators not to take account of the real progress made here.

Fact: Taking account of all the pillars of the land reform programme, it is estimated that 24% of all farmland has been redistributed or land rights have been restored. This is close to the 30% target, which could be reached by 2030.