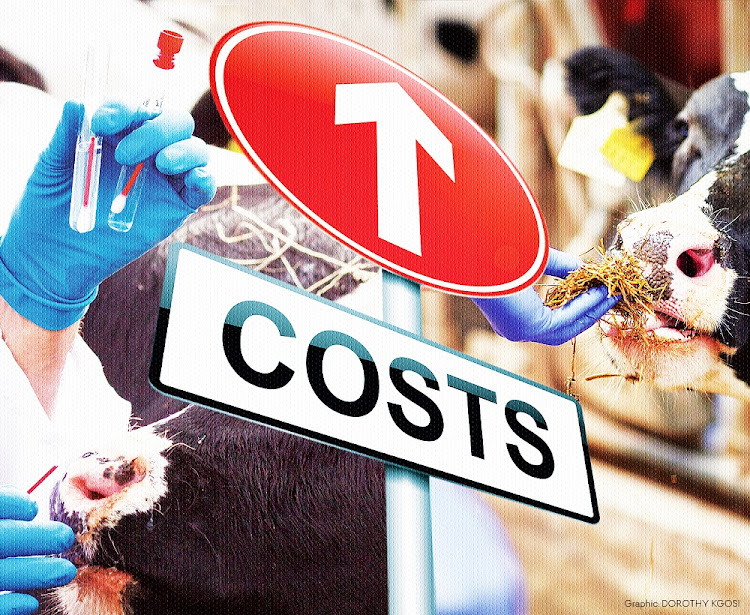 SA’s agricultural sector has had two consecutive years of strong growth, with expansion in all sub-sectors — livestock, field crops and horticulture. This year will be a break from the 2020 and 2021 strong performance. I expect the sector’s gross value added to fall 3%-5% year on year given the high base from 2021.

The overall field crop harvest is likely to be lower than the previous season, though some crops such as soya beans and sunflower seed promise a large harvest. But this will not be the only source of potential contraction in the sector. The livestock sector, which accounts for about half the sector’s gross value added, continues to face numerous challenges.

The generally higher prices of grains and oilseed, a key feed ingredient, have been presenting increased cost pressures to livestock and poultry farmers since 2020. For example, yellow maize prices were up 38% year on year on June 23, trading at R4,357 a tonne.

While farmers were able to manage the rising feed costs in the past two years to an extent, the current season has presented new challenges — a vast outbreak of foot-and-mouth disease as well as continued occurrences of swine flu and avian flu outbreaks.

While the outbreak does not necessarily mean a wide slaughtering of cattle for farmers and, encouragingly, has now been quarantined in various sites or farms, the economic effect still cuts deep. The effect on livestock auctions is huge.

Moreover, bans by many countries on imports of SA’s livestock products constrain the growth of the sector and harm the potential for emerging black farmers to reap the benefits from an increasingly export-orientated livestock sector.

SA’s beef industry is aggressively building its export activity, with exports having grown nearly seven-fold over the past two decades, reaching 54,334 tonnes in 2021. But SA is still not able to export its top-quality beef products to the US, UK and EU markets, where the returns would be far higher than exporting to the Middle East and other smaller markets.

The financial pressure is not limited to the cattle industry, but also to sheep, goats, pigs and poultry. China has temporarily suspended imports of SA’s wool for about three months due to the foot-and-mouth disease outbreak. China is a significant market, accounting for about 70% of the country’s wool exports. The ban has a broad negative financial impact on the wool industry and the communities that rely on it.

Livestock is also one of the subsectors with deep involvement by farmers from the former homelands. The National Agricultural Marketing Council estimates suggest that black farmers account for 18%, 13% and 34% of wool, mohair and cattle production respectively.

The accuracy of the data is debatable, but the point is that a sizeable share of agricultural output by black farmers is affected by these financial pressures. These new-entrant farmers might not have financial buffers to carry them through in a tough livestock market —  we already hear from established commercial farmers that they are struggling due to financial pressures.

Keeping in mind the focus of the Agriculture & Agro-Processing Master Plan on inclusive growth and employment creation in the agricultural sector, efficient prevention and management of animal diseases and maintenance of animal health is critical.

The government has a critical role to play, and the legislative, budgetary and coordinating tasks of public veterinary services and animal health services is vital in protecting the national livestock herd, and to enable the growth the sector desperately needs.

The department of agriculture, land reform & rural development established an animal biosecurity task team, which we understand completed its task with crucial recommendations for improving the current challenges. The report should be made public and its recommendations implemented urgently. This could provide a platform for effective collaboration between the private sector and the government in putting in place measures to curb the spread of diseases and improve the health of all sectors of the livestock sector.

For key wool markets, such as China, the department should actively engage with authorities in that country to resume exports, as we believe there is a framework for engagement from previous episodes of this type of outbreak. Such engagement is crucial as China opens its economy from the tough lockdowns. Our government should move with speed on this engagement.

In the case of rising feed costs, the expected seasonal rains will be a saving grace, allowing natural grazing veld to continue recovering well and assist the livestock sector to an extent.

Overall, SA’s agricultural sector faces numerous challenges, ranging from network industry to broad policy matters such as a need for increased export markets. But in the near term, resolving the constraints detailed above, especially those faced by the livestock industry, would bring some relief.