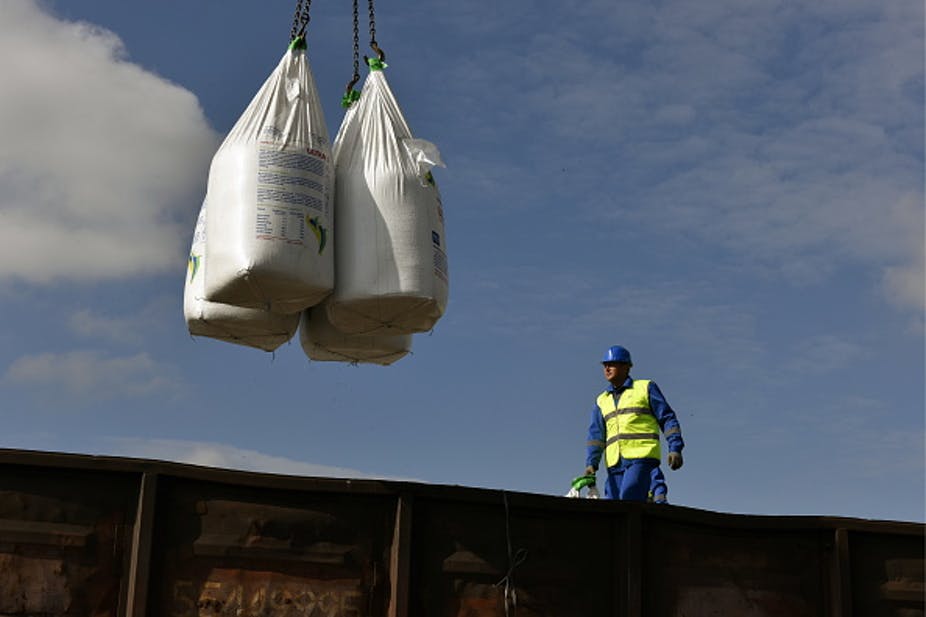 Written for and first appeared in The Conversation.

It’s therefore important to keep track of the impact of Russia’s invasion of Ukraine on various transmission channels, and the knock-on effects they could have on Africa’s agricultural markets.

So far the focus has been on the supply and price of grains and oilseeds. The war presents upside risks to both because Russia and Ukraine make significant contributions to global exports of wheat, maize and sunflower oil.

There are also risks for countries that export to Russia. Globally the country is the 13th largest agricultural products importer in value terms. The key products Russia imports include citrus, cheese, bananas, wines, soybeans, apples, pears, beef and palm oil. These are mainly sourced from a range of countries such as Belarus, Turkey, Brazil, Germany, China, Ecuador, Italy, Indonesia, France and Germany.

In the case of South Africa, Russia accounted for 7% of its citrus exports in value terms in 2020. And it’s South Africa’s second-largest market for apple and pear exports.

But there’s a great deal more at play. Russia is the world’s leading exporter of fertiliser materials in value terms, followed by China, Canada, the US, Morocco and Belarus. These fertiliser mixtures include minerals or chemicals ranging from nitrogen to phosphorous and potassium.

Fertiliser constitutes a significant share in the growth of agricultural commodities and crops across the world, and also a substantial share of input costs.

As with the grains and oilseeds market, the actual disruption of export activity is yet to unfold. But the extensive sanctions that Western countries have imposed on Moscow, including the agreement to exclude some Russian banks from some global payment systems such as SWIFT, could negatively affect Russia’s trading activities.

This disruption could push fertiliser prices even higher than the spike experienced in the past 18 months. In some cases, for example in ammonia, prices rose by 260% between December 2020 and December 2021. This meant that farmers had to absorb substantial costs for the 2021/2022 crop across the world. The generally higher commodity prices, specifically grains and oilseeds, provided financial flexibility to absorb some of these costs, but not fully. The Russia-Ukraine war will now be an added upside risk on prices for farmers.

For consumers, the knock-on effects will typically be through the size of the final harvest of the crop. Farmers are price takers, and might therefore not necessarily pass on the input costs to consumers.

Fertiliser prices increased sharply in 2021 and remained elevated this year.

For instance, in January 2022, the international prices of a range of key fertiliser ingredients shot through the roof. Since January 2021 the price of ammonia has gone up by 220%, urea by 148%, di-ammonium phosphate by 90%, and potassium chloride by 198%.

A range of factors have been behind these sharp input cost increases. These include supply constraints in critical fertiliser-producing countries such as China, India, the US, Russia and Canada. Rising shipping costs, and high oil and gas prices have also been contributing factors, along with firmer global demand from agriculture produces.

The Russia-Ukraine conflict will add to these price pressures, particularly if Russia’s exports suffer as a result of the war and sanctions. The primary markets for Russia’s fertiliser material are Brazil, Estonia, China, India, the US, Finland, Mexico, Poland, Romania, and Latvia.

This week the US Secretary of Agriculture, Tom Vilsack, said it was too early to know if the war in Ukraine would disrupt international fertiliser trade. But he warned companies against taking “unfair advantage” of the current circumstances by artificially inflating prices.

This low use of fertiliser has partly contributed to generally lower agricultural productivity in the region.

There are numerous reasons for this low use of fertiliser, including affordability issues for the continent’s smallholder farmers. The current prices levels have exacerbated the problem. This could keep productivity levels low for the foreseeable future.

But the picture isn’t uniform. Countries such as South Africa are major fertiliser users, with an average of 72,8 kilograms of nutrients per hectare of cropland compared to the regional average of 19,9 kilograms.

It has often been argued that Africa needs to improve its agricultural productivity to improve its food security. But for this to happen there needs to be a financially conducive production environment. As things stand, the cost of inputs like a fertiliser doesn’t augur well for the realisation of improved agricultural productivity on the continent.

This is a global challenge for all farmers, and unfortunately, the ultimate crop yields that farmers harvest is dependent on the use of fertilisers. A reduction in fertiliser use, and the resulting negative impact on yields, has implications for consumers across the world, particularly in poor countries where agriculture constitutes a significant share of the economy.