The maize production estimate is slightly below our estimated 16,7 million tonnes, and the Bureau for Food and Agricultural Policy’s estimated 17,0 million tonnes. Considering the optimistic yield estimates we received from farmers on the ground and observations in places we have been in, we are inclined to think that there is room for the Crop Estimates Committee to raise its maize production estimates further coming months. Thus, we are not adjusting our view for now from our current estimate of 16,7 million tonnes.

The current maize production data essentially mean that South Africa would remain a net exporter in the 2021/22 marketing year, starting in May 2021 (corresponds with the 2020/21 production season). South Africa’s annual maize consumption is roughly 11,4 million tonnes.

The expected large harvest could also add downward pressure on maize prices, especially as we forecast an excellent crop in South Africa and across the Southern Africa region, a major importer in the previous year. For example, Zambia’s maize production could reach 3,4 million tonnes (up 69% y/y), while Malawi’s maize harvest is estimated at 3,8 million tonnes (up 24% y/y). There is optimism about the crop in other countries, including Zimbabwe.

Over the past few months, the weaker domestic currency, growing demand for South Africa’s maize in the Southern Africa region and the Far East, coupled with generally higher global grain prices, provided support to the domestic maize prices. But we believe that the domestic crop conditions will matter more for price movements in the future than has been the case over the past few months.

In the soybean case, the price drivers are somewhat similar to maize. Nevertheless, an increase in the soybean harvest will still not change much because South Africa imports around half a million tonnes of soybean meal (although this volume will fall notably this year on the back of the large domestic harvest). The country will most likely continue being dependent on imports, even at these harvest levels, to meet the growing demand for soybean meal by the poultry sector. Hence, global soybean market dynamics will continue to influence local prices.

In sum, the broadly large summer grain and oilseeds production estimate this season is on the back of increased area plantings for summer crops and favourable rainfall since the start of the season. We expect the maize production estimate to be adjusted somewhat in the coming month as farmers on the ground continue to express optimism about yields prospects. All this bodes well for domestic food price inflation in 2021. 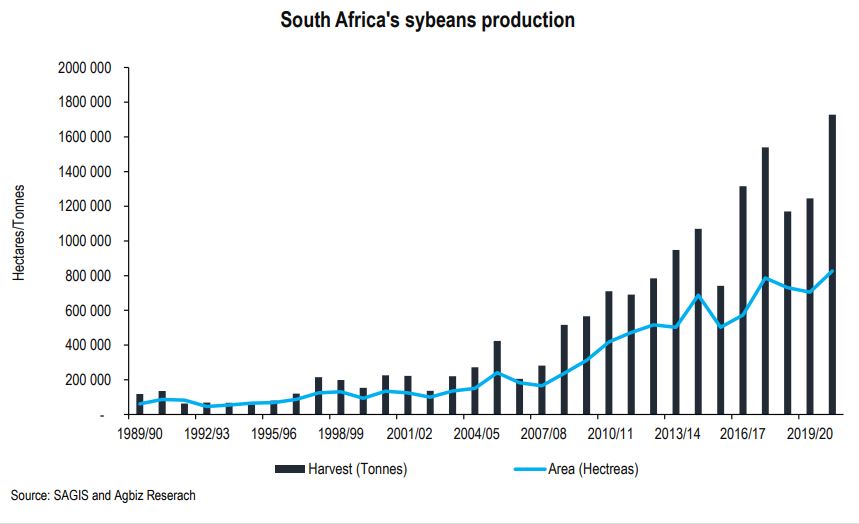 We have a record soybean harvest