South Africans are not the only ones experiencing a relative increase in agricultural commodity prices. The world over is experiencing a similar trend, at least, for essential commodities such as grains, dairy and vegetable oils. The Food and Agriculture Organization of the United Nations recently released an update of its monthly Food Price Index, which reached 113 points in January 2021, up 10% year-on-year, and highest since July 2014. This particular index is compiled as a combined index from agricultural commodity prices in various countries, thus mirroring a fair view of relative global food prices.

In South Africa, whether one looks at maize prices or soybeans, wheat or sunflower seed; the price trend shows a notable uptick over the past couple of months; roughly in line with the global trend. For example, on Friday, 05 February 2021, South Africa’s white and yellow maize spot prices closed at R3 299 and R3 451 per tonne, respectively up by 8% and 21% from the corresponding period last year. On the same day, South Africa’s soybeans spot price closed at R9 990 per tonnes, which is 65% higher than the corresponding period last year.

To some, such increases would be counterintuitive in a year where we expect another bumper crop in South Africa, aided by increased summer crop plantings and favourable rains since the start of the 2020/21 production season in October. But because South Africa is a relatively small player in the global agricultural market — particularly grains — market dynamics in major producing and consuming countries influence the domestic price movements. The somewhat weaker domestic currency also contributed to the price increases, amongst other factors.

Staying with grains and oilseeds, which are amongst the aforementioned global Food Price Index’s price drivers, China’s rising demand has been exceptionally fundamental in the current surge of prices.

Click here to read the full column for this week in Fin24. 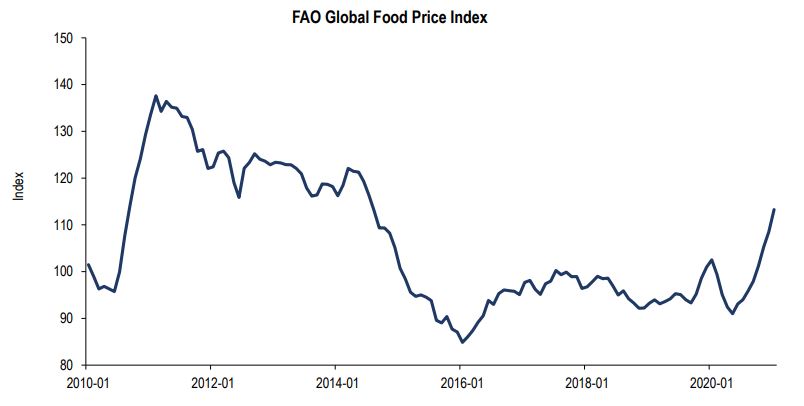