My intention in this blog post is to briefly discuss South Africa’s food price inflation data for October 2020, which showed a sharp increase to a level last seen in August 2017, as illustrated below in Exhibit 1 below. 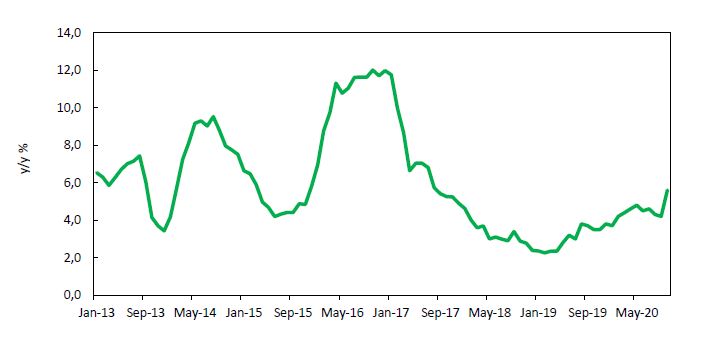 South Africa’s food price inflation accelerated to 5.6% y/y in October 2020 from 4.2% in the previous month, and well above the average of 4.4% for the first nine months of the year. This was broad-based and reflective of the agriculture commodity price increases we have observed in the past few months. I will single out a few, with higher weighting on the food price inflation basket, namely: (1) Bread and cereals, (2) Meat, (3) Vegetables, (4) Milk, eggs and cheese, and (5) Oils and fats.

First, the increases in bread and cereals price inflation mirrors, although to a limited extent, the surge in grains prices that’s been underway over the past couple of months (see Exhibit 2). The South African grains prices were pushed higher mainly by the weaker domestic currency, stronger demand in the Southern Africa region and also the Far East, as well as generally higher global grains prices, which are, in turn, supported by strong demand from China. This happened despite the country having received its second-largest maize harvest in history in 2019/20, about 15.4 million tonnes. 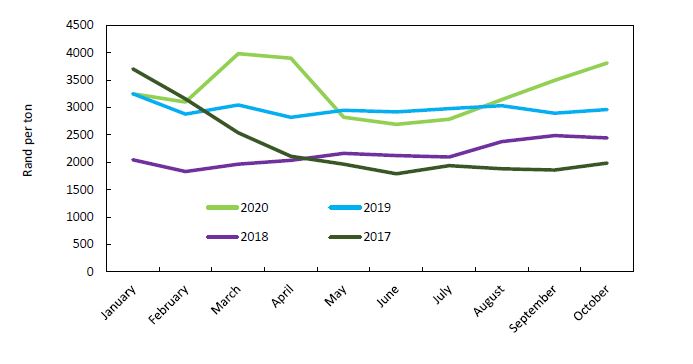 Third, South Africa had a fairly good season in field crops and horticulture (fruit and vegetable) perspective, but that was only at the aggregate level. Some important vegetables which include potatoes saw prices rising in the past few weeks because of lower harvest in central and northern regions of South Africa. But this is all temporary. The outlook for the 2020/21 production season is positive, with prospects of La Nina induced rains.

Fourth, the increase in milk, eggs and cheese category of the food price inflation was a surprise as total raw milk purchases and supplies in the country have generally been higher than the previous five years, according to reports from the South African Milk Processors’ Organisation. Perhaps, this somewhat reflects the global dynamics, where milk prices have generally been at higher levels compared to 2019, according to the FAO Dairy Price Index.

Lastly, the acceleration in oils and fats price inflation is partly influenced by the weaker domestic currency in the past few months. South Africa remains a net importer of vegetable oils and therefore exposed to exchange rate risks. Moreover, the global vegetable oil prices have generally been at higher levels in recent months, boosted, in part, by the growing demand from China. These dynamics influenced price levels that we observed in the South African market.

Nevertheless, this is all history, and many people are probably more interested in the outlook view going into 2021. Here I am generally optimistic that South Africa’s food price inflation might not exceed an average of 5% y/y in 2021. The expected Lan Nina rains will help boost the domestic harvest; but importantly harvest across Southern Africa, which will lessen pressure and demand for South African products. This, in turn, could lead to softer agricultural commodities prices and contain food price inflation at comfortable levels. The strengthening domestic currency also bodes well for products the country imports such as vegetable oils and fats.