South Africa’s beef industry has maintained a trade surplus since 2014 (see Exhibit 1). The key markets included China, Lesotho, Mozambique, Eswatini, Angola, Hong Kong, Vietnam and Kuwait in the case of frozen beef. While in terms of fresh beef, Kuwait, UAE, Eswatini, Mozambique, Jordan, Namibia, Qatar and Lesotho and Mauritius were the key markets. These exports were valued at roughly US$114 million in 2019, down 19% y/y, according to data from the Trade Map.

One of the key threats to the general beef export growth trajectory in the recent past has been the frequent occurrence of the Foot and Mouth Disease (FMD), especially around the Limpopo area. An outbreak of this disease has led to the temporary suspension of South Africa’s beef and live animals’ exports to some key markets, at times, over the past two years. Hence, even the volume and value of exports has somewhat tapered from 2017.  FMD was, of course, not solely the key reason for a decline in exports; the rebuilding of the herd from 2017 after increased slaughtering activity during the 2025-16 drought years was another factor.

Why am I bringing all this up today now?

It is mainly because the South African government issued a report yesterday providing an update on the issue of the FMD in parts of Limpopo, which are the areas where there had been recent outbreaks. Positively, of the 19 positive locations that were identified with FMD in November 2019, the quarantine has thus far been lifted on 9 locations.

As a result of the progress made, some of the countries that had placed trade restrictions on South African livestock, such as Botswana, have lifted the ban on the export of live cattle from South Africa. Also, worth noting is that beef trade hadn’t stopped due to covid-19, there were still relatively large volumes of beef exports over the past few months, particularly the first quarter that I have data for so far. The markets were mainly the usual ones that I mentioned above.

Overall, the beef industry is one of the subsectors of the South African agriculture that continues to contribute to the expansion of this sector, and will surely be amongst the areas to focus on boosting growth when we think of the post-COVID-19 rural economic strategy. In the previous notes, I have written about the labour intensive horticulture industries as a primary focus, which is a correct policy focus. But we all know that some regional climatic and agroecological conditions in South Africa aren’t conducive for horticulture. Hence, the discussion of the livestock sector, above other economic benefits it brings, becomes important. I also know of successful farmer development stories from this sector such as those of Sernick Group in the Free State, which have successfully commercialized a number of black farmers. 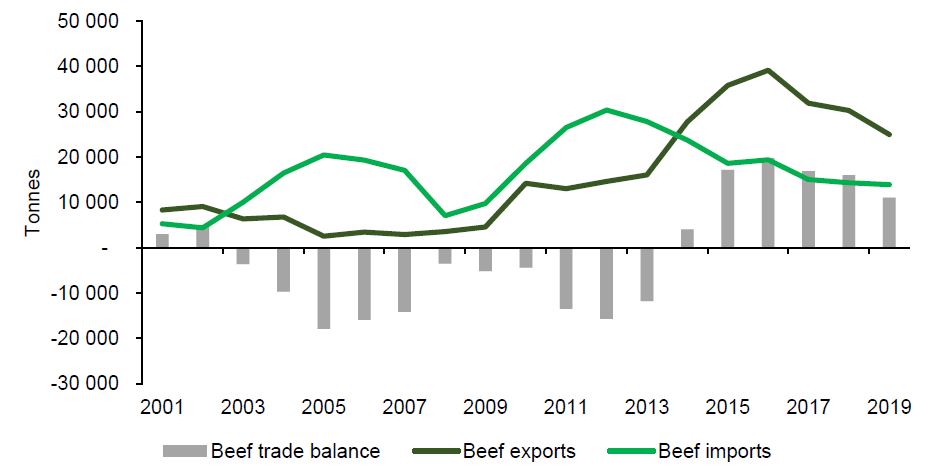