South Africa’s food price inflation accelerated to 4.6% y/y in July 2020, from 4.5% y/y in the previous month. This was primarily underpinned by a slight uptick in bread and cereals; fish; and oils and fats. With the current higher maize prices, which yesterday crossed R3 000 per tonne mark, I’m inclined to believe that we could see a further uptick in food price inflation, although probably mild, in the coming months. I’ve explained the key driving factors of higher maize prices in a year of an abundant harvest here.

At the start of the year, when we were seeing prospects of good maize, fruits and vegetables harvest; I was convinced that the only upside risk to South Africa’s food price inflation would be “meat”. Even here, the challenge was to be base effects, as in 2019 South Africa’s meat prices were largely under pressure on the back of increased supply when the beef exports were temporarily suspended because of the Foot-and-Mouth Disease. Another key risk that I later added was poultry price potential increase after South Africa lifted the import tariff. With these factors in mind, I estimated that South Africa’s food price inflation would average around 4% y/y in 2020.

I still maintain this data for now, but I will soon have to revisit the numbers, as maize prices, which I had hoped would play a neutralizing role of the potential increase in meat prices are now increasingly becoming an upside risk to food price inflation. Then again, to the point I made earlier this week; in the current environment of lower economic activity, the South African retailers might not have the ability to easily pass on these grains price increase to a consumer that is focusing on resilience in the face of job and income losses.

Essentially, what I am putting forward this morning is that the upside risks to South Africa’s food price inflation have now increased than the past few months. The “bread and cereals” component of the basket, which one might not have categorized as potentially adding upswings should be viewed differently now. July 2020 data already provides evidence to this point, as this food category was amongst the key drivers of South Africa’s food price inflation during the month. Also, maize prices have been steady at fairly higher levels for some time, which again supports the view that this adds to upsides risks to food price inflation. I will revisit this theme with a more concrete view of where one sees food price inflation this year. For now, I maintain the number of an average of around 4% y/y (from 3.1% y/y in 2019). 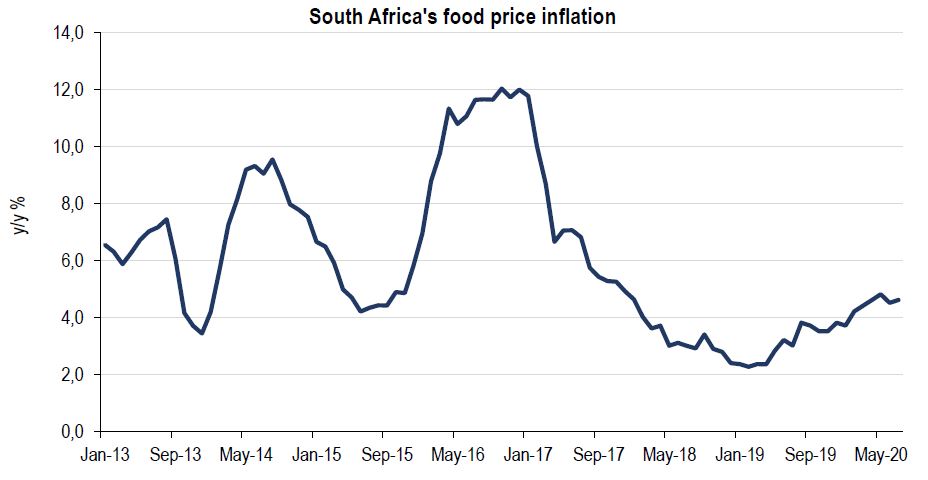