South Africa’s food prices increased at a relatively slower pace in January 2020 compared to December 2019. The data released this morning by Statistics South Africa shows that the country’s food price inflation was at 3.7% y/y in January 2020, while the previous month was 3.8% y/y. This deceleration, however, was not across the food basket. Only price inflation of bread and cereals; fish; and vegetables decelerated. But this was enough to overshadow the increases in meat; milk, eggs and cheese; oil and fats; fruit; sugar, sweets and desserts.

Firstly, the outlook for South Africa’s grain production is positive. Maize production could increase by, at least, 11% y/y to 12.5 million tonnes. The higher-end estimates point to a 14.0 million tonne harvest. What’s more, global wheat production, which South Africa is a net importer of, is set to be up 4% y/y to 764 million tonnes, according to data from the United States Department of Agriculture. This means grain-related product prices could be under pressure in the coming months.

Secondly, meat price inflation was subdued in 2019 because of the ban on red meat exports on the back of a foot-and-mouth disease outbreak at the start of that year. We are seeing a repeat of a similar situation this year following another foot-and-mouth disease outbreak at the end of 2019. This means South Africa’s meat prices could again remain at relatively lower levels for the greater part of this year. But the lower base effect of 2019 will mean that meat will not suppress the overall food price inflation in 2020 as much as in the previous year.

Against this backdrop, we believe South Africa’s food price inflation should hover around 4.0% in 2020 (food price inflation averaged 3.1% y/y in 2019). Under this scenario, the upside pressure will largely come from meat; and importantly, it will mainly be base effects in the case of red meat, and a possible slight uptick in poultry products prices. Grain prices should remain subdued on prospects of a good domestic maize crop, and bearish Chicago grains prices. 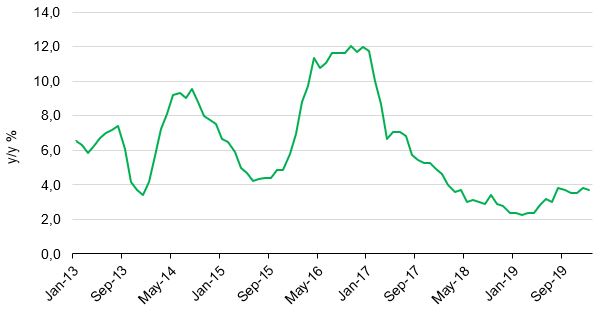