Avocado is one of the crops that make the headlines whenever there are unusual trends in its market. This is understandable as the fruit has become the favourite of many because of its health benefits, amongst others. Hence, I feel compelled to caution fellow South Africans that when one sees the 46% year-on-year decline in South Africa’s avocado exports of 2019 to 47 940 tonnes, they should not worry much.

It is not that South Africa is regressing, but rather more of normalization. The exports of 2018 were an exception because of an unusual bumper harvest that year. South Africa’s avocados production reached a record level of 169 243 tonnes in 2018, from 101 377 tonnes the previous year. As a result of this, exports increased notably as illustrated in Exhibit 1 below.

In 2019, South Africa’s avocado production normalized or fell from the previous year to 121 156 tonnes, which is still a good harvest – third-largest harvest on record. Hence, the exports subsequently fell to 47 940 tonnes in 2019.  The South African avocado industry players are optimistic about 2020’s harvest and export prospects. The numbers I’ve seen suggest that 2020 could be the second-highest export volume on record. So, when these numbers finally make it to the headlines, don’t stress much, have a bite of avocado sandwich and enjoy knowing that we could see a better harvest and increased supply in your local market soon. 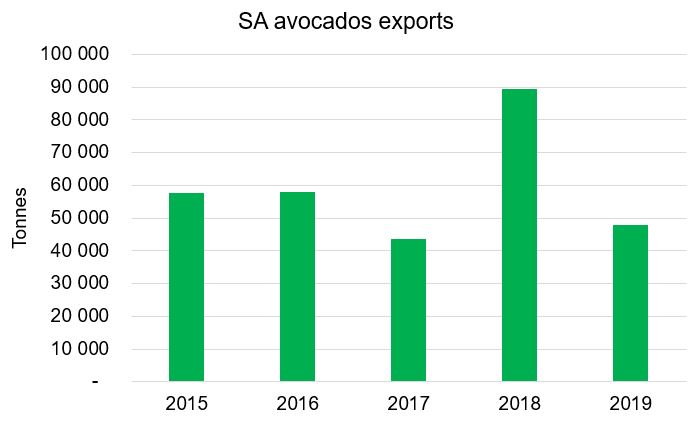