In a normal season, by this period, farmers would be hard at work planting, especially in the central and eastern regions of South Africa. But this has not been the case because of dryness that has prevented farmers from planting. Soil moisture in South Africa’s farmland is rated very short (dry) in nearly all regions of the country with the exception of a few areas near the border of Eastern and Western Cape where soil moisture was rated marginally adequate on 25 October 2019, as illustrated in Figure 1 below. 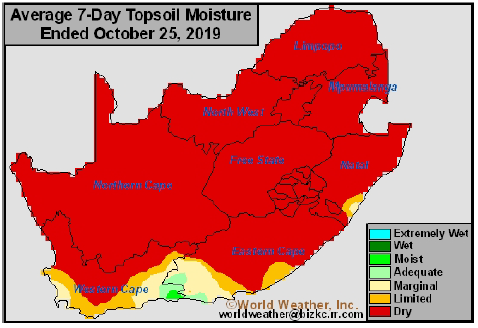 Over the weekend, some regions in the central parts of South Africa received light rainfall, which is a welcome development. But this was not sufficient to make meaningful improvement on soil moisture. The country needs a consistent and slow rainfall which will help to replenish soil moisture and thereafter support planting and growing of the crop.

We are generally positive that such rainfall is likely. The weather forecast for the next two weeks shows prospects of rainfall across the summer rainfall (or crop-growing) areas of South Africa. More importantly, the South African Weather Service forecasts above-normal rainfall in the central and eastern regions of South Africa between November 2019 and January 2020.

As encouraging as this is, it comes with some level of uncertainty and hence it will be important to monitor the weather conditions over the coming weeks as that will influence farmers decisions to plant.

Going forward, aside from monitoring weather conditions, an important date to keep diarised is 29 January 2020, because on this day the Crop Estimates Committee will release its preliminary plantings estimates.