Some positive developments in Zimbabwe’s agriculture

Without trying to sweet talk Zimbabwe — after all, they have big economic problems to contemplate on – it is worth noting that there are some positive developments in their agricultural sector this year. Zimbabwe’s sugar industry has remained resilient in the midst of all the significant declines in the production of most key agricultural commodities since the ill-conceived land reform policies in the early 2000s.

The country’s 2019/20 sugar cane production could increase by 4% year on year to 3.7 million tonnes, according to data from the United States Department of Agriculture (USDA). This is underpinned by a combination of factors which include an increase in area planted, accelerated sugar cane root replant programme, and improved sugar cane yields due to the sufficient irrigation water.

Now, this potential increase in sugar cane harvest means that Zimbabwean sugar mills will be fairly busy during the 2019/20 season. To this end, the actual sugar production could increase by about 6% to 490 000 tonnes in the 2019/20 season, which is roughly above the long-term production levels, as illustrated in Figure 1 below. 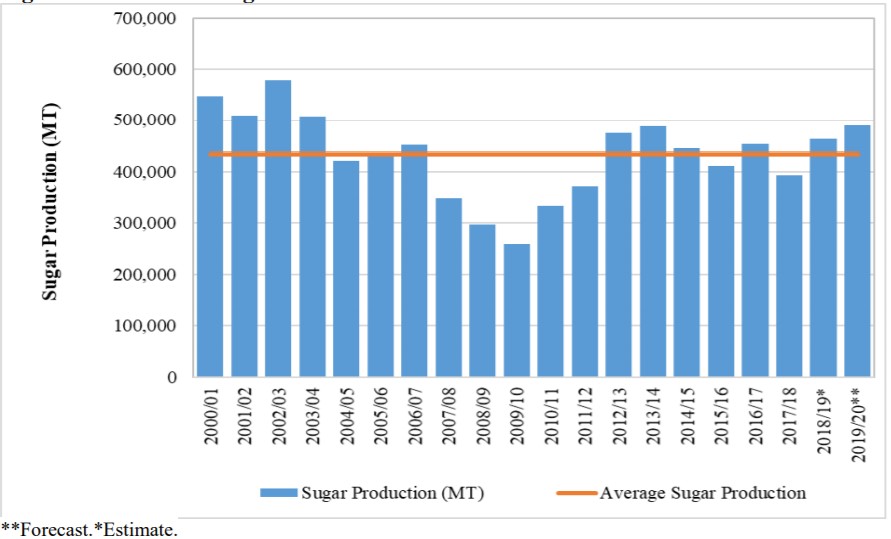 This is well above Zimbabwe’s annual sugar consumption of about 350 000 tonnes, which means the country will be a net exporter of sugar in the 2019/20 season. The main export destinations for Zimbabwe’s sugar typically include the United States, Kenya, Botswana, South Africa and the European Union region. And I think these will remain the key buyers of the commodity in the 2019/20 season.

What makes me happier about this improvement in Zimbabwe’s sugar production is that this might create some much-needed jobs along the production chain, no matter how few they are.  Also, this will, to some extent, boost the country’s agricultural economy.

Above all, any improvement in Zimbabwe’s agricultural sector is worth highlighting because of agriculture’s large share contribution to the country’s GDP, and also in employment. Zimbabwe needs to get things right in this sector in order to begin to see improvement in the rural economy. All this will take off from the land policy, and in the recent months, Mnangagwa’s administration has been sending positive signals with regard to addressing the devastation caused to farmers by the early 2000’s Mugabe policies. I wrote an essay on this matter on the London School of Economics blog, you can access it here.