Is it time for South Africa to create dope jobs?

‘Dope jobs’ are a real thing in Canada. On December 3, Bloomberg published an article exploring the jobs prospects in Canada’s growing cannabis industry which was legalised for recreational use in October 2018. Bloomberg notes that “there has been a spike in postings for jobs at cannabis growers and retailers. And next year will see even more demand for labour as Canada expands the number of legal cannabis products to include edibles and concentrates”. This is clear from Figure 1 below. 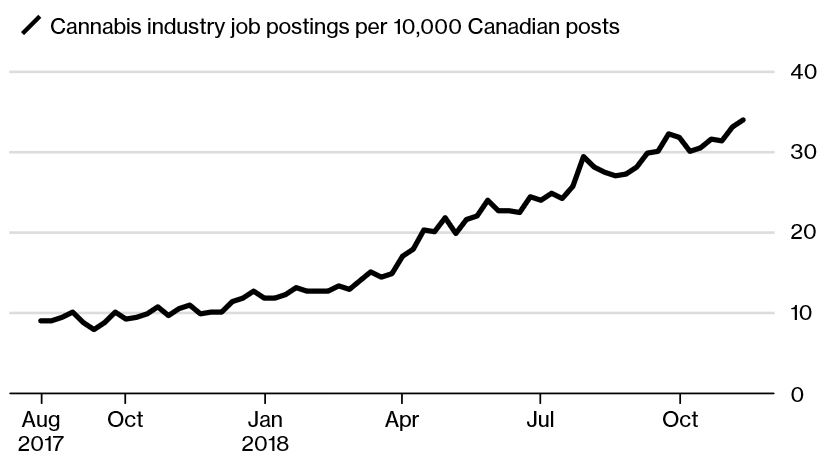 Moreover, Cannabis At Work, a recruitment and training site, estimates that the Canadian cannabis industry could create roughly 125 000 jobs in the first year after legalisation. Some of the prospective jobs will most likely be in research and development positions, extraction and formulations, and retail.

Now, being a South African where the unemployment rate is 27%, I cannot say I don’t envy these job prospects. Fortunately, the ‘dope jobs’ discussion is gaining momentum here at home as well. After publishing an essay about South Africa’s potential ‘dagga-belt’ on November 20, there has been growing interest from agricultural policymakers and senior practitioners who promise to be looking at this plant closely in the coming months so that we too can have the cannabis industry making a productive contribution to the South African economy.

At the moment, cannabis has been de-criminalised in South Africa for private use. While the users or consumers might be thrilled with this, my interest is more on the international trade space to boost the economic benefits for the country.

Any potential unintended consequences will need to be carefully researched and considered when legislation is developed to outline the conditions under which it could be commercially produced, I think there should be some research on the possibilities of legalising marijuana production under controlled circumstances for international trade purposes. This is an approach that could create jobs of a comparable scale to what we are witnessing in Canada. Globally, there is a long list of companies that are involved in this plant that South Africa could look to as a target market, in addition to other destinations where it has been legalised for medicinal purposes.