I was not planning on blogging tonight, but I could not help it after noticing another notable move in the South African maize (white and yellow) and sunflower seed prices. Both nearest and new season contract month prices of these commodities increased by more than R100 a tonne from levels seen on Friday (December 7).

Why is this happening?

Well, one word – the weather. Remember, between October and February, which is planting to pollination, the weather becomes an important factor in the South African grains and oilseeds market and, to some extent, one of the major driving forces of price. So, the current dry weather conditions in the central and western parts of South Africa are the primary reason for the recent sharp increases in maize and sunflower seed prices.

Although this month started with an optimistic message from the South African Weather Service indicating a possibility of above-normal rainfall in the summer crop growing areas of the country between December 2018 and February 2019, most parts of the country are still dry. The expected rainfall last week did not materialise in most regions, thus planting activity has not progressed in the central and western parts of the country. It is only a few areas of the eastern Free State and Mpumalanga that received very light showers, with the highest being 11 millimetres in the Frankfort area.

Therefore, planting has thus far largely advanced only in the eastern parts of South Africa, which received higher rainfall at the beginning of the season. But these areas are not in good condition as the recent heat wave and drier weather conditions started negatively affecting newly planted crops. In terms of crop distribution, these are areas that predominantly produce yellow maize and soybeans.

Meanwhile, the western regions of the country which largely produce white maize and sunflower seed have not seen progress in planting due to persistent drier weather conditions. The impact this has had on soil moisture is clear from Figure 1 below. 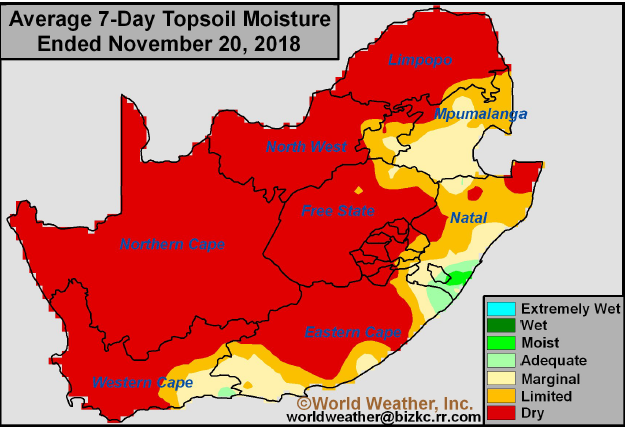 Worryingly, it is getting rather late in the planting season in the western parts of South Africa, particularly for the maize regions (Figure 2). The sunflower seed crop still has time to plant until early January 2019.

Above all, South Africa still has fairly good grain supplies for the 2018/19 marketing year, so the above-mentioned production dynamics will affect the crop which will come to market mid-2019.