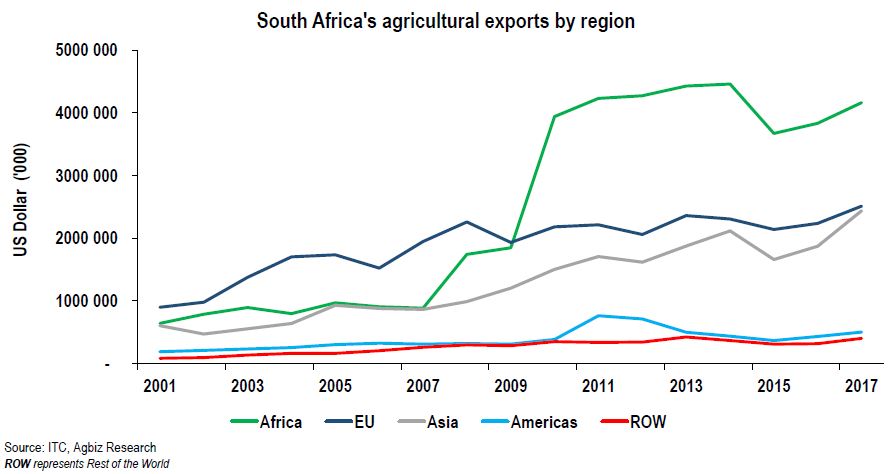 In 2017, South African agricultural exports grew past US$10.0 billion for the first time, boosted by growth in exports of edible fruits, beverages, spirits, vegetables, grains and other agricultural products. This is a 15 percent increase from 2016 – a year that was characterised by El Nino induced drought.

Africa and Europe continued to be the largest destination markets for agricultural exports, collectively absorbing 67 percent of total exports in 2017, measured in value terms.

In more detail, Africa remained South Africa’s largest market, accounting for 42 percent of agricultural exports, which is one percent increase from a five-year average share. The sector’s export growth to the continent was led by relatively competitive industries such as beverages, grains, fruits, sugar and vegetables.

Trailing Africa was the European Union region accounting for 25 percent share of South Africa’s agricultural exports in 2017, up by 13 percent from the five-year average share. South African agriculture’s export growth to this region was also led by industries such as beverages, wool, sugar, fruit and animal fats.

Asia is also an important market for South Africa’s agricultural exports, taking up 24 percent share in 2017, up by a third from the previous year. Wool, fruit, grains, beverages, vegetables and meat were the leading products exported to this particular region.

The Americas and the rest of the world accounted for 5 percent and 4 percent shares, respectively, which is a 3 percent and 14 percent increase from 2016 exports. Exports to these regions were also dominated by fruits, beverages, sugar, flowers and ornamental foliage.

Above all, a closer look at the trade statistics shows that South Africa’s agricultural sector recorded a positive trade balance of US$3.3 billion in 2017, which is also a record level in a dataset starting from 2001. The impact of the severe drought in the Western Cape will only transpire in the 2018 trade statistics.

South Africa’s agricultural imports increased by 5 percent year-on-year to US$6.7 billion in 2017, according to data from Trade Map. This was driven by a notable uptick in grains, particularly wheat and rice, on the back of reduced domestic production as a result of the Western Cape drought and an increase in annual consumption. For the case of rice, South Africa is a net importer and saw rice imports growing by 10 percent year-on-year to 1.1 million tonnes in 2017. There were also large imports of sugar, tobacco and coffee, amongst others.