The Western Cape is Key to Africa’s Canola Production The African continent produces roughly 200 000 tonnes of canola a year, according to data  of the Food and Agricultural Organization of the United Nations. For perspective, this accounts for a mere 0.2 percent in global production.

South Africa’s commercial canola production is concentrated in just one province, the Western Cape. This means the province produces two-thirds of Africa’s canola seed. Not to take anything away from the provincial farmers, I should highlight that the production of this crop in other provinces in South Africa is largely constrained by climate variation. Canola is a winter crop, hence concentrated in the winter rainfall area – Western Cape.

This, however, hasn’t stopped other provinces from exploring the possibility of this crop as consumption increases due to growing healthy eating habits in society, amongst other possible uses. Case in point is the Alexandria area in the Eastern Cape, which is undergoing some field trials of canola crop. Late last year, I had lunch with the folks leading the canola production in the province, Anati Oils. They told a good story about their future plans. But, I haven’t followed up to check the current conditions and progress thus far.

In 2017/18 production season, South Africa’s or should I say, the Western Cape’s canola production declined by 11 percent from the previous season to 93 500 tonnes due to drought. 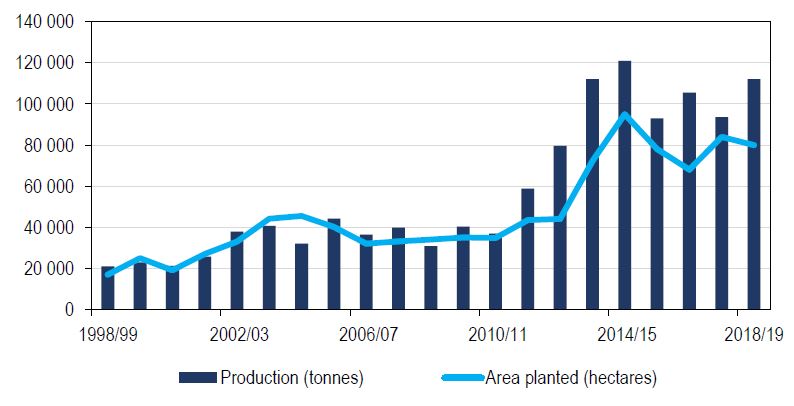