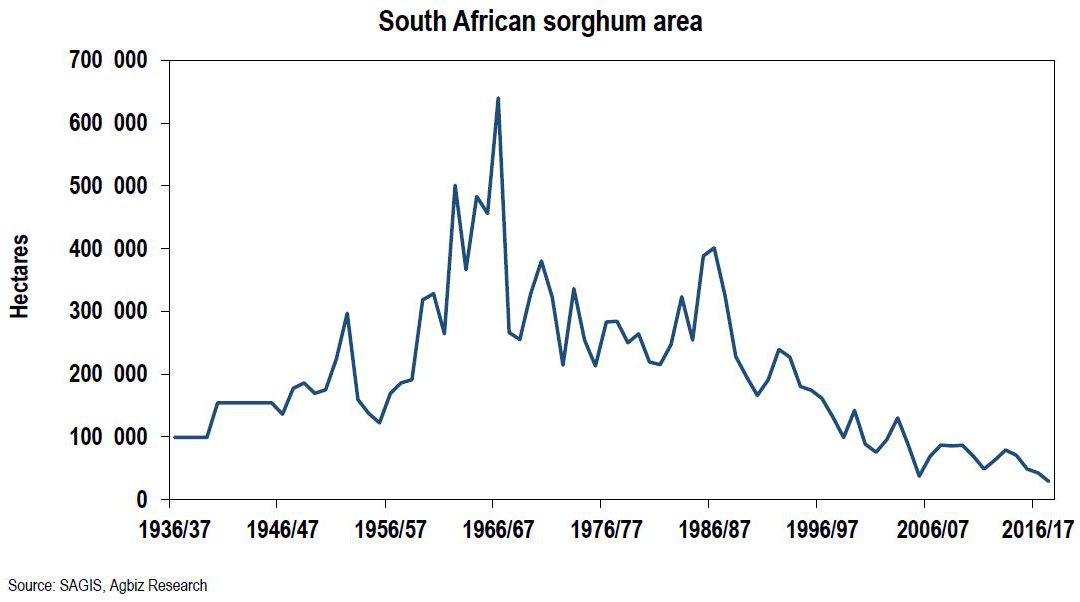 South African farmers planted 28 800 hectares of sorghum in the 2017/18 production season – the smallest area on record in a dataset starting from 1936/37. This is a disappointing picture, given that sorghum was once seen as key to the development of the biofuel industry in South Africa and, in turn, job creation in rural areas.

In 2014, sorghum was one of the promising crops in South Africa’s agriculture, boosted by the hope of the development of the biofuel industry, job creation and a new market for farmers, particularly black smallholder farmers. Mabele Fuels and Industrial Development Corporation (IDC) were the first organisations to embrace this initiative. Mabele Fuels was to build a processing plant in Bothaville, with a potential to create roughly 16 700 jobs and a market for farmers in that area. In a similar vein, the IDC was going to create jobs and a much-needed market opportunity for smallholder farmers in the Eastern Cape province.

These plants were going to utilise roughly 500 000 tons of sorghum a year, which is treble the volume that South Africa was producing then. The government was the key player in the processes, with an aim to create jobs, boost the economy, create a market for smallholder farmers and revive the South African sorghum industry. Unfortunately, the government incentives fell short and the process did not materialise.

In fact, by early 2016, it was clear that the biofuel industry was a lost dream and farmers were opting for other opportunities, such as accessing new export markets. This was somehow a difficult task as South Africa is not an established exporter of sorghum. In fact, South Africa’s sorghum exports are concentrated in southern Africa, with key markets being Botswana and Swaziland.

Fellow agricultural economist Tinashe Kapuya and I wrote a research piece in early 2015 that aimed to identify potential new markets for South Africa’s sorghum industry. We found Cameroon, Sudan, and Ethiopia as the only attractive markets on the continent, having a potential for growth and low import tariffs.

Globally, Japan and Mexico were identified as the large markets, with zero-rated tariffs for South African sorghum exports.

The key question that emerged from our article was whether South Africa would be competitive enough in these markets, in other words, be able to produce the required volumes at lower costs than its competitors. This was left unanswered and some farmers were still keen to explore these opportunities until progress was disrupted by the 2015/16 drought.

Given the failure of the biofuel initiative, the development of higher yielding seed varieties and expansion of export markets could be the way of reviving the South African sorghum industry. Globally, there is a stable demand for sorghum, but for South Africa to participate in such an environment, the country would need to increase volumes and be able to sell at competitive prices. This calls for more research and creative ideas to save the sorghum industry in South Africa.