Do Women Perform the Bulk of the Work in African Agriculture? 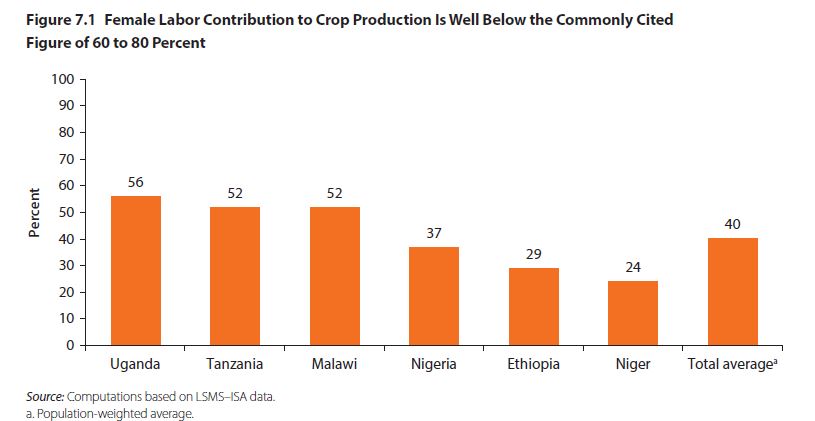 The World Bank recently released an interesting book which questions a number of data and statements about Africa’s agricultural sector. The book is titled Agriculture in Africa: Telling Myths from Facts. It covers a wide range of topics from smallholder land access, post-harvest losses, financing of agricultural inputs, agricultural labour productivity and women’s work in agriculture amongst others.

Having recently written an article on women’s contribution to the agricultural sector, I was quickly drawn in on the chapter that dealt with the subject. The first thing which stood out was the notion that the figure often cited, namely that roughly 80% of agricultural labour input in Africa is by women, is flawed (see featured image).

The book puts women’s share of labour in crop production at an average 40%, with variations across countries. Worth noting, however, is that the data does not cover the entire continent, but selected countries, namely: Ethiopia, Malawi, Niger, Nigeria, Tanzania and Uganda. With that said, the countries cover a wide array of the continent’s farming zones.

Across the aforementioned countries, the highest share of women’s contribution to agricultural labour is 56% in Uganda, followed by 52% in both Tanzania and Malawi with the lowest being 24% in Niger.