From Beast Of Burden To A Delicacy – Donkeys Are Back! 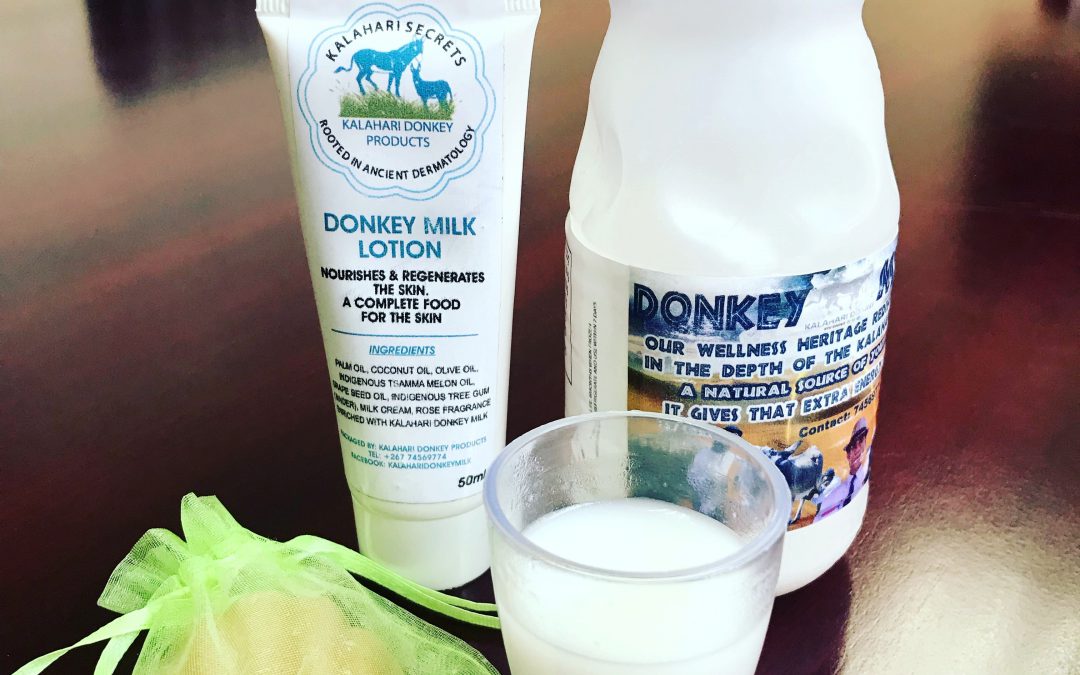 Having recently read about the new investments in Kenya and Zimbabwe aimed at creating donkey value chains, I immediately accepted the invitation in the hopes of learning more about the market. To my surprise, the presentation did not touch on donkey skins and meat, but focused only on donkey milk – and soap and lotion derived from this milk.

Anga Holdings considers donkey milk a good alternative for consumers with dairy allergies, and it can also be used as a supplement for breast milk. More striking from the presentation, was the price of donkey milk in countries such as India, where a litre sells for US$60. Closer to home in Botswana, 250ml sells for around 80 BWP, which is roughly equivalent to R110.00. Fortunately, some goodies were provided to attendees of the meeting (milk, soap and lotion), so I has first-hand experience of these products.

As yet, this industry is not well established in South Africa with the products distributed in the meeting imported from Botswana. However, Kgomanyane-Modimogale believes there is potential to establish this market in South Africa despite negative public perceptions regarding donkey products. He hopes that with a strong marketing, research and education drive about the donkeys, public perception will change.

Unlike Anga Holdings vision, other African countries have ventured into the donkey skins and meat business. There are reports that last year a Chinese company invested US$6 million in building a donkey-abattoir in Kenya, which processes hundreds of donkeys per day. This investment was mainly driven by solid demand for meat and skins in China and other Asian countries. The skins are used for traditional medicine, while the meat is viewed as a nutritious food source. The increased demand for skins in Asia saw donkey prices doubling from around US$120 in 2016 to US$240 this year.

With donkeys not yet formally regulated as a recognised livestock market, the growing global demand for the animals has led to theft in many communities and pressure being placed on free-ranging donkey populations. Thus, governments in countries such as Botswana, Mali and Niger, amongst others, have resorted to placing a ban on exports of donkey products.

Data from the Food and Agricultural Organisation of the United Nations show that Africa has approximately 18.9 million head of donkeys. Ethiopia accounts for more than a third of that with a 39% share. Trailing Ethiopia is Niger, Egypt, Nigeria and Burkina Faso, with 9%, 7%, 7% and 6%, respectively. While it is unclear where the development of donkey value chains will lead in the long term, the aforementioned countries stand a good chance to benefit from the growing Asian demand (provided that the value chains are regulated to ensure sustainability).

South Africa remains the smallest player in the donkey market with 156 000 donkeys. This makes up a single percentage share in the continent’s herd.